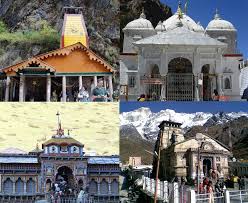 The Chardham comprises of the four pilgrimage sites in Uttarakhand namely the Kedarnath, Badrinath, Gangotri and Yamunotri. Many Hindus consider that they should visit the Chardham at least once in their lifetime. The Vaisnavi believe that by visiting the Chardham they will achieve “Moksha” or in simple words “Complete Salvation”.

Badrinath is located in the state of Uttarakhand in the Garhwal hills on the bank of the Alakananda river. According to the Hindu Shastra, Badrinath got its prominence when an avatar of Vishnu viz. The “Nar-Narayana” did his tapasya there. During that period of time, the place was filled with trees carrying berries. In Sanskrit, berries are called “badri” and that is how Badrinath, meaning “The Lord of The Berry Forest” got its name and since then Badrinath became the first Dham.

Kedarnath is a town in the state of Uttarakhand which is located in the Himalayas near the Chorabari Glacier, the head of the river Mandakini and is approximately about 12000 ft. above sea level. The name Kedarnath holds the meaning “Lord of The Field” which is taken from the Sanskrit word Kedar meaning “field” and Natha meaning “lord”.

The town of Gangotri lies in the Uttarakshi district on the banks of the river Bhagirathi in the state of Uttarakhand. It is said according to the Hindu mythology that when Lord Shiva released the mighty river Ganga from his lock, Goddess Ganga descended here. Generally it takes nearly four hours to travel to the Gangotri temple from Uttarakshi by roadways.

Yamunotri is considered to be the main source or origin of the river Yamuna and is also said to be the seat of Goddess Yamuna in the Hindu religion. The shrine of Yamunotri, which is the westernmost shrine in Garhwal Himalayas, is the main attraction at Yamunotri. Maharaja Pratap Shah of Tehri Garhwal constructed the Yamunotri temple.